Shingles is a painful, blistering rash that is caused by the same virus that causes chickenpox, the varicella-zoster virus (VZV).  Shingles can only occur in people who have had chickenpox.

Although the symptoms of chickenpox usually go away after the recovery from the initial childhood infection, the virus remains hidden in nerve cells. In some people it remains dormant forever, yet in others it attacks again. The second episode of chickenpox virus infection is called shingles.

Shingles is sometimes referred to as “herpes zoster” or “zoster” because it belongs to the same family of viruses. However, it is not caused by the herpes virus that causesgenital herpes or cold sores.

The first sign of shingles is often burning or tingling pain, or itch, in one particular location on only one side of the body.

Before the rash develops, there is often pain, itching, or tingling in the area where the rash will develop. Other symptoms of shingles can include fever, headache, chills, and upset stomach.

After several days or a week, a rash of fluid-filled blisters, similar to chickenpox, appears in one area on one side of the body. 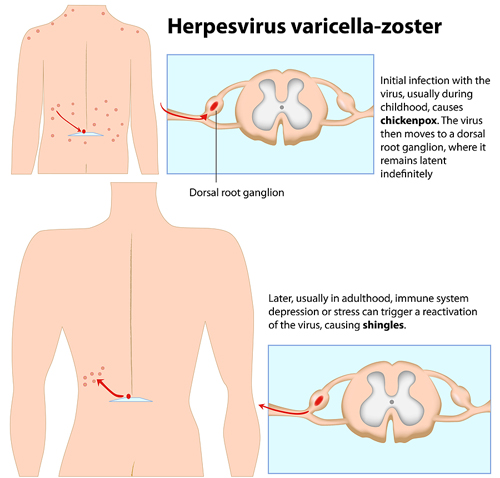 Shingles pain can be mild or intense. Some people have mostly itching; some feel pain from the gentlest touch or breeze. The most common location for shingles is a band, called a dermatome, spanning one side of the trunk around the waistline. The second most common location is on one side of the face around the eye and on the forehead. However, shingles can involve any part of the body. The number of lesions is variable. Some rashes merge and produce an area that looks like a severe burn. Other patients may have just a few scattered lesions that don’t cause severe symptoms. Mild cases of shingles with only a few lesions are common.

For most healthy people, the blisters start to scab over after 3-5 days. The rash usually clears within 2 to 4 weeks. The pain and itch that accompany the lesions fade away, and the blisters leave no scars. Other people may have sensory symptoms that linger for a few months.

Are There Any Long-Term Effects From Shingles?

How Often Can A Person Get Shingles?

Most commonly, a person has only one episode of shingles in his/her lifetime. Although rare, a second or even third case of shingles can occur.

Can Shingles Be Spread To Others?

A person with a shingles rash can pass the virus to someone, usually a child, who has never had chickenpox, but the child will develop chickenpox, not shingles. The child must come into direct contact with the open sores of the shingles rash during the blistering phase. Once the rash has developed crusts, the person is no longer contagious.

Merely being in the same room with a shingles patient will not cause the child to catch chickenpox because during a shingles infection the virus is not normally in the lungs and therefore can’t be spread through the air.

What Can Be Done To Prevent The Spread Of Shingles?

The risk of spreading shingles is low if the rash is covered. People with shingles should keep the rash covered, not touch or scratch the rash, and wash their hands often to prevent the spread of the chickenpox virus (varicella). Once the rash has developed crusts, the person is no longer contagious.

A shingles vaccine is available for use in people 60 years old and older to prevent shingles.

How Is Shingles Treated?

Shingles attacks can be made less severe and shorter by using prescription antiviral drugs: acyclovir, valacyclovir, or famcyclovir. These medications should be started as soon as possible after the rash appears

Acyclovir is available in a generic form, but the pills must be taken five times a day, whereas valacyclovir and famcyclovir pills are taken three times a day. It is important not to miss any doses and not to stop taking the medication early.

Antiviral drugs can reduce by about half the risk of being left with postherpetic neuralgia, which is chronic pain that can last for months or years after the shingles rash clears.

Doctors recommend starting antiviral drugs at the first sign of the shingles rash, or even if the telltale symptoms indicate that a rash is about to erupt. Even if a patient is not seen by a doctor at the beginning of the illness, it may still be useful to start antiviral medications if new lesions are still forming.

Other treatments to consider are anti-inflammatory corticosteroids such as prednisone. These are routinely used when the eye or other facial nerves are affected.

Who Is At Risk For Getting Shingles?

About 25% of all adults, mostly otherwise healthy, will get shingles during their lifetimes, usually after age 40. The incidence increases with age so that shingles is 10 times more likely to occur in adults over 60 than in children under 10.

People with compromised immune systems from the use of immunosuppressive medications or serious illnesses, such as cancer or HIV, are at special risk of developing shingles. These individuals also can have recurrent shingles and may have shingles that never heal. Most people who get shingles strenghen their immunity to the chickepox virus and will not get the disease for another few decades.

Can Infection With VZV During Pregnancy Harm The Baby?

Many mothers-to-be are concerned about any infection contracted during pregnancy.  Some infections can be transmitted to the baby either across the mother’s bloodstream to the fetus or during the birth process.  Chickenpox virus infection during pregnancy poses some risk to the unborn child, depending upon the stage of pregnancy.  During the first 30 weeks, maternal chickenpox may, in some cases, lead to congenital malformations. Such cases are rare and experts differ in their opinions on how great the risk is. Most experts agree that shingles in a pregnant woman, a rare event, is even less likely to cause harm to the unborn child.

If a pregnant woman gets chickenpox between 21 to 5 days before giving birth, her newborn can have chickenpox at birth or develop it within a few days. But the time lapse between the start of the mother’s illness and the birth of the baby generally allows the mother’s immune system to react and produce antibodies to fight the virus. These antibodies can be transmitted to the unborn child and help fight the infection. Still, a small percent of the babies exposed to chickenpox in the 21 to 5 days before birth develop shingles in the first 5 years of life because the newborn’s immune system is not yet fully functional.

If the mother contracts chickenpox at the time of birth, her immune system has not had a chance to mobilize its forces and create very many antibodies that can fight VZV.  Although some of the mother’s antibodies will be transmitted to the newborn via the placenta, the newborn will have little ability to fight off the attack because its immune system is immature. If these babies develop chickenpox as a result, it can be fatal. They are given zoster immune globulin, a preparation made from the antibody-rich blood of adults who have recently recovered from chickenpox or shingles, to lessen the severity of their chickenpox.